In our project we came across a really big problem related to mapping. Having two systems that initially were defined by the BA to be somehwat simillar we have chosen the simple XSLT (done through Altova Mapforce) of the input message to the output one.

Afterwards it turned out that the functions required to perform a mapping are becoming enormous. An example of such a mapping is:

So in order to map it we decided to move to JBoss Drools. The decision tables were out of question since the logic was to complex and customized to be placed in the spreadsheet so we coded everything in the DRL files. Soon the rules got really big and some of our developers were forced to spend plenty of time on constant recreation of rules stated by the BA.

Out of frustration and after having seen all the amazing things at the 33rd degree conference I decided to start finding solutions to my problems which were:

After stating these problems a research regarding mapping frameworks took place and one of the concepts that I began working on was trying to create the mapping in Groovy. Since Groovy (thanks to for example PropertyMissing and MethodMissing) is a perfect language for creating a DSL I decided to start right away. The only two things I had to remember about were:

Having defined the language, the constraints I created the following solution: 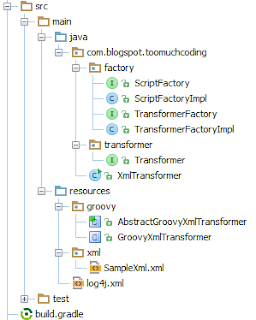 The project structure
As you can see the project structure is very simple. To begin with it is built in Gradle. The main function can be found in the XmlTransformer.java. The flow is such that the TransformerFactory creates a Transformer basing on the Groovy script that came out of the ScriptFactory (in our project for different types of products that we distinguish by a field in the XML file, we have different DRL files). The Groovy scripts are residing in the classpath in the /groovy/ folder (of course at the end of the day those scripts should be placed outside any jars).
In the build.gradle
we can see that there is no groovy plugin - it has been done deliberately since we don't want our scripts to be compiled. Now let's take a look at the logic behind the TransformerFactory that compiles the Groovy script. What is really important is the fact that our Groovy class implements an interface created in our Java project - we want from the Java point of view to have no problems with execution of the Groovy code.
TransformerFactoryImpl.java
A GroovyScriptEngine is used to load a script by name. I chose the GroovyScriptEngine (hopefully I used it in a good way ;) )  because:

The most complete solution for people who want to embed groovy scripts into their servers and have them reloaded on modification is the GroovyScriptEngine. You initialize the GroovyScriptEngine with a set of CLASSPATH like roots that can be URLs or directory names. You can then execute any Groovy script within those roots. The GSE will also track dependencies between scripts so that if any dependent script is modified the whole tree will be recompiled and reloaded.

I wanted to have some way of caching the compiled classes in order not to have any issues with PermGen.
Anyway you can see that I am doing some conversions to have the URL of the classpath Groovy script resource. At the end we are extracting a class from the Groovy script and we are casting it to the Transformer.
AbstractGroovyXmlTransformer.groovy
In this abstract Groovy class I decided to place all the logic that could blur the image for the BA. In addition to that I created some helper classes and methods. In order to fully use the Groovy's DSL capabilities I used the propertyMissing method to map the words "map" and "convertDate" to create the instances of the helper classes which are used in the Builder design pattern way:
If there is no such "function" (for example a BA makes a typo or sth) then an assertion error is being thrown and a list of supported "function" (which in reality are properties - but they are functions from the BA's perspective) is being printed.
Now let's move to the script that would be used by the BA.
GroovyXmlTransformer.groovy
This piece of code does the following mapping (You can check the /xml/SampleXml.xml ):

The pros and cons of this approach are as follows:

The problem with mapping that we encountered in our project turned out to be a very interesting issue to deal with. The example shown in this post is only a proposition of solving the issue and hopefully could be a starting point to a further discussion on the topic. If you have any ideas or opinions on this topic please leave a comment under this article.
The sources can be found on the Too Much Coding BitBucket repository and on GitHub.